Posted on December 8, 2012 by webmanager

Broadleigh Gardens offer one of the largest ranges of Agapanthus plants anywhere. If you would like to order for delivery next spring, please click here.

You can forget the big, blousy belles of Madeira or the lusty beauties of New Zealand and Tresco, my choice of agapanthus lies with the subtle charms of the A.campanulatus cultivars & hybrids. Agapanthus have been a feature of my life ever since I was taken to Headbourne Manor as a newly engaged fiancée and left clutching seed of their famous hardy hybrids. These had originated from a packet of mixed agapanthus seed from Kirstenbosch Gardens sent to Luly Palmer in the 1940s.

The Nile Lily or Blue African Lily are native to S.Africa, though they have rapidly spread around the temperate world, their tidy evergreen foliage making them ideal subjects for municipal plantings such as airports. All produce strap-like leaves and an umbel of tubular flowers in shades of blue or white. Although all the varieties most commonly grown today are almost certainly hybrids, indeed some authorities have even gone as far as to suggest that there is only one, variable species, there are distinct differences to be seen between them. Also these differences are not solely visual; there are distinct and significant cultural requirements as well. 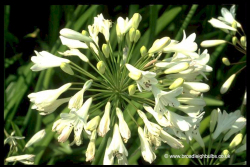 Until the Headbourne hybrids became freely available the most commonly encountered Agapanthus were forms of the large flowered A.africanus or A.praecox (previously known as A.umbellatus ) which were usually acquired on holiday as dormant plants or ‘bulbs’ as the fleshy rootstock is frequently miscalled. These handsome plants are virtually evergreen, with broad leaves and large heads, often 20cms or more in diameter with 80 or more flowers. The individual flowers, 5cm long x 3.5cm wide, are deeply cut, the lobes being considerably longer than the tube, and only slightly spreading. They are characterised by an uneven profile. the lower petals being held almost horizontal. They originally came from the coastal regions and although they are the most striking cultivars they are not fully hardy. In all but the mildest districts they are best grown in containers which should be kept frost free during the winter. They flower best when pot bound, although there is a fine line between pot bound and starved which is difficult to define.

Other species, which can be occasionally encountered, have distinctive umbels of nodding, tubular flowers such as A.inapertus or A.dyeri. The latter is reported to be hardy to –10oC at Kew but we have not grown any outside as yet. It makes a spectacular pot plant producing masses of upright stems. The dark ‘Bressingham Blue’ seems to have inherited a touch of this attractive nodding shape.

By far the greatest number of named Agapanthus owe their existence to selection from among the offspring of the original Headbourne Hybrids. These are deciduous, based upon the species, particularly A.campanulatus, from higher and therefore hardier altitudes. Their leaves are narrower and their flower heads considerably smaller, but they make up for any shortcomings in size by their sheer exuberance of flower. Most make excellent and easy plants for any well drained, fertile soil in full sun.

Over the years we gradually added a few distinctive named clones and this was the extent of our collection until I visited Savile Gardens. John Bond had decided that his “Royal” cultivars., which had been selected and named for an RHS trial, should be introduced to a wider public. He kindly asked me to choose the varieties I thought had commercial potential. This was some years ago and now that they are they really getting into their stride we can assess and compare them to other clones.

The great danger of a review like this is that it ends up as an amorphous list. This is especially true of Agapanthus where there is a single, two if you count white, colour and the differences between plants are often subtle. The current RHS Plantfinder lists some 100+ cultivars. I will therefore only mention a tiny number of individual varieties but try and sort them into distinct groups.

Height is an obvious ways of distinguishing between cultivars. They vary from 10cm to 1.6m (1’-6’ is so much more graphic!). The smallest cultivars are utterly charming but equally frustrating as they are frequently shy to flower well. They resent disturbance and it can be some years before the clump will deign to flower. Do not be tempted to move them. They seem to thrive best in well drained soils such as on a rock garden or raised bed or they can be grown in pans. One of the tiniest must be ‘Baby Blue’ which forms tight mats of narrow leaves barely 8cms long. ‘Peter Pan’, ‘Streamline’ and ‘Liliput’ are a little larger, at 37cm, with neat 8-10cm diameter heads of mid blue. In ‘Streamline’ the umbel is sparsely flowered but the individual flowers are large and produced with abandon. It makes an excellent pot subject.. ‘White Dwarf’ is a compact hybrid with rounded, broad petaled flowers. Unlike the others this slightly taller hybrid is very free flowering and is excellent for the front of a border or container. Our hybrid ‘Littlecourt’ is similar but later flowering.

At the other end of the scale are the giants. Standing some 1.6m tall these are suitable for the back of the border although the characteristic habit of all Agapanthus, to lean towards the sun, will necessitate discreet staking. ‘Buckingham Palace’ has large 20cm heads of intense dark blue. It flowers in peak season unlike the other giant, ‘Loch Hope’, which is one of the last to flower in mid September. It is not as dark as Buckingham Palace but is a good strong blue. The other late flowering variety is ‘Blue Moon’, an Eric Smith hybrid with huge heads of clear ice-blue on thick,1.3m stems. Its broad leaves denote at least a touch of A. praecox in its ancestry but it has proved completely hardy here. It only receives the same treatment as all our hardy varieties, a mulch of leaves held down by a large net.

In recent years the popularity of these easy plants has soared and with it there has been a similar rise in the number of new cultivars, many originating in New Zealand. Among the best introductions are ‘Black Pantha’ and ‘Purple Cloud’. These giants have nodding flowers of rich purple and are probably best kept in a pot. The intense blue-purple ‘Graskop’ is hopefully more hardy. ‘Enigma’ is to my mind one of the best and certainly most distinct cultivars to date. It has large heads of pure white and each flower has a deep blue base. It is not hardy. 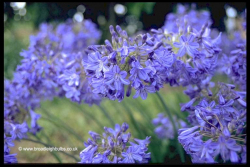 Among the remaining cultivars it is flower colour and shape that is most significant. Although the diameter of individual heads varies from 4-7” the actual number of flowers in each umbel is more telling. This varies from 30-60, the most congested giving a bolder impression. Even more significant is the shape of the flowers. Most have 6 petals but some, such as the deep blue ‘Blue Giant’, have extra ones giving the head a very ‘full’ appearance. This variety is also interesting as the flowers are held in the same plane as the pedicel and not at an angle as is more common. Individual flowers also vary in shape from broadly tubular to strongly campanulate, where the lobes are almost reflexed from a short tube. These flowers are broader than they are long, giving a dense, round profile to the head. Good examples of this are ‘Profusion’, ‘Blue Imp’ , ‘Ben Hope’ and ‘Royal Blue’, all of which are deep blue.

‘Midnight Star’, ‘Super Star’ and ‘Ice Blue Star’ are very vigorous varieties with narrow buds and flowers that are longer than they are wide in large heads. They vary from a glowing deep blue to a cool, pale blue. They are among the best for garden decoration, producing a mass of flowers over a long period.

Among the white flowered cultivars there is a proliferation of names but to date I have not seen any really significant variation among them other than the sturdy and free flowering ‘White Dwarf’. Many of the stocks are very mixed but ‘Ice Lolly’ should have green stems and no hint of blue in the flower where as ‘Glacier Stream’ and ‘White Smile’ both have dark stems and blue tips to the petals. Although there is no pink agapanthus these blue tips give an overall pink tinge to the heads as they fade. This is especially striking in our hybrid ‘Snow Shadows’ 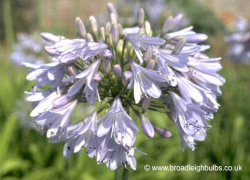 Variegated Agapanthus seem to be more or less evergreen and consequently less hardy. Yes, ‘Tinkerbell’ does flower but only rarely. However I find the rather lax, insipid blue flowers a distraction and prefer to grow it in a pot as a handsome foliage plant for outside in the summer and under glass in the winter. This year , in desperation, we decided drastic measures were called for and we cut all the foliage back to see if this would stimulate them into flowering. The answer is no! We have had little experience of the larger ‘Golden Rule’ but have recently rescued it from the open garden where it was languishing and hope it will prefer a more cosseted existence under glass. The new silver variegated ‘Silver Moon’ is proving to be amazingly prolific and a free flowering, although the foliage is much more lax. A praecox v orientalis variegata is very similar to ‘Tinkerbell’ but does flower, albeit sparsly. I am also afraid that the raspberry bed is under threat as the collection grows and the agapanthus continue their inexorable march through what was my vegetable garden. Ah well, there are worse things.

This entry was posted in Agapanthus. Bookmark the permalink.