Daffodils and Tulips in Containers

Pots must be the simplest yet most rewarding method of growing any bulb, but especially daffodils and tulips. It needs no special skills and is virtually fool proof: just a matter of put them in and stand back. It is rather like the bold council spring bedding displays that fill every roundabout, but on a small scale. No garden is too small to squeeze in a couple of containers of bulbs and many will even make themselves at home in that tiniest of gardens, the window box. Pots can be used singly or in pairs to mark focal points in the garden, to frame a door or gateway, to draw the eye along a path or just clustered joyously on a patio. Daffodils and tulips start flowering early in the spring and continue through to early May so a succession of pots can be used or one large pot can be planted with a succession of bulbs. These containers really do shout spring is sprung! 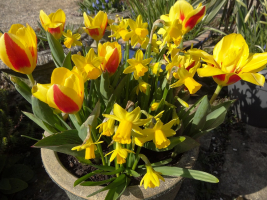 Daffodil varieties for pots need to be chosen with care. Many have a single large flower sitting on the top of a relatively tall stem with attendant luxuriant foliage so the actual flower power can be rather limited. They are also very sensitive to water, or more particularly, lack of it, quickly and irrevocably flopping if allowed to dry out. There is nothing more dispiriting than a collapsed pot of narcissus, even more so if it is a window box in full public view. No amount of subsequent watering will remedy the situation.

It is better to choose short varieties, especially those that are multi headed and preferably multi scaped (stemmed) as well. Among the best are the early flowering and ubiquitous ‘Tete a Tete’, the delicate lemon ‘Hawera’ and the similar white flowered ‘Petrel’ and the wonderful creamy ‘Toto’ and ‘Sailboat’ These have the added advantage of neat relatively short foliage as well. N. ‘Geranium’ is much larger but its robust multi headed stems of scented white and orange flowers are good for large containers as are the scented jonquil cultivars ‘Bell Song’, (white with pink cup) , ‘Quail’ and ‘Rosemoor Gold’ (deep golden yellow). 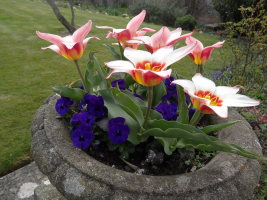 Tulips on the other hand stand stiffly to attention even when fading and so do not suffer from the same problems of flagging which mean that virtually any variety can be grown in a container to suit personal taste. The only caveat is to ensure that the pot size is in keeping with the ultimate height of the flower. Nothing looks more uncomfortable than a flamboyant 2’ tulip teetering above a 1’ pot. There is a huge array of short and medium sized tulips to choose from.

When planting bulbs in the garden much is made of the associations with their neighbouring plants. This is equally true with tulips in containers but here it is the colour of the container itself and its immediate surroundings that need to be taken into consideration when choosing varieties. The usually flamboyant colour of the tulip must not only tone with that of the container but preferably with the background as well. A mass of bright pink tulips in front of an orange brick wall does nothing for either. With the wonderful array of colours available this should not be a problem, it just requires a little forward planning. The only real rule when planting tulips in containers is to make sure that enough bulbs are used to make a decent display. All the ‘standard’ rules about distance between bulbs in the garden are suspended. Bulbs in pots can virtually touch each other or even be planted in staggered layers above each other.

I think that double tulips really come into their own in containers. The double flowers give more flower power than the single varieties and are much longer lasting and far more weather resistant. The bright yellow ‘Monte Carlo’ is multi-headed as well as fully double and is the quintessential pot subject. The flamboyant parrot tulips with their amazingly frilled and crimped petals are another perfect and long lasting choice as are the multi headed tulips. These can either be the smaller species varieties like the wonderful ‘Little Beauty’ and ‘Little Princess’ or one of the new range of multi stemmed cultivars now coming onto the market like ‘Cartouche’.

When planting 2 or more varieties of tulips in a single container it is better to have either two distinct seasons, a short early variety being superseded by a tall late one or by using complementary colours and a similar flowering time. ‘Prinses Irene’ (deep orange), ‘Orange Princess’(double) and ‘Rococo (parrot) are all sports of the scarlet ‘Couleur Cardinal’ and all tone with each other to give a really dramatic container.

The tulip season kicks off with the dwarf early flowering T. kaufmaniana cultivars with their large, clean coloured flowers nestling in the centre of virtually flat leaves. I love to fill the urns on my steps with ‘Ancilla’ or ‘Hearts Delight’. These really live up to their common name of waterlily tulips, opening flat in the sun to reveal glistening white insides. Other good, short stemmed, large flowered tulips are the greigii varieties with their striped leaves, like ‘Red Riding Hood’, and the dwarf fosteriana cultivars ‘Concerto’ and ‘Candela’. I like to plant winter flowering pansies in these pots as well in the autumn and these are chosen to ultimately tone with the tulips. One tip; when the tulips have faded just hoick out the bulbs and leave the pansies to continue until you are ready to plant the summer bedding.

There may be other containers in the garden that will benefit from the addition of a few tulips. Having a surplus of the tiny ‘Red Hunter’ one autumn I tucked them into the top of my huge container of hostas. In the spring it looked just as though the hostas had produced exotic scarlet flowers, the slender tulip leaves being well hidden. Much more remarkable is that they have revelled in their unusual home and the dry summer it provides and are still flowering years later. 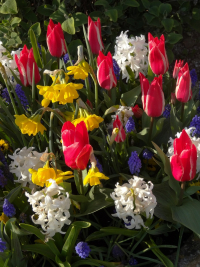 Traditionally bulbs are planted as a single variety per pot and overplanted by winter pansies or polyanthus but with care it is possible to extend either the flowering season or the display and plant exuberant containers of mixed bulbs. The basic rule is that the foliage of the first variety to flower should not overwhelm the later ones, or that the later ones should be tall and strong enough to push through and above the leaves of the earlier varieties. Remember the leaves on all bulbs continue to grow after flowering.

Crocus, especially the dumpy varieties like chrysanthus cultivars, can be planted as the top layer of any pot. They will start the season by flowering in February and can be just pulled up once they have faded or ignored as their leaves are too small to cause any problems. The ferny foliage of Anemone blanda on the other hand provides a positive benefit, covering the bases of the taller bulbs and softening the rather stark vertical lines and usually hanging out over the edge of the pot as well. Their starry flowers are an added bonus. The blue forms are a good foil for golden daffodils or red tulips whilst the white are excellent mixed with blue grape hyacinths and creamy white or lemon daffodils such as ‘Toto’ or ‘Hawera’..
Muscari are another undemanding companion bulb especially the new M. aucheri cultivars like ‘Ocean Magic’ (turquoise,) and ‘White Magic’ (creamy white) or the intense blue double flowers of M. armeniacum ‘Blue Spike’. Their thin leaves which appear in the late autumn and are rather tedious in the garden are surprisingly not a problem in a pot, softening the often heavy leaves of tulips and they do flower for a long time. I like to mass blue muscari under the white double Tulip ‘Mount Tacoma’ or the multi headed ‘Weisse Berliner’ or mix them in a shallow pan with the dwarf T.tarda.

In very large containers hyacinths can be added to the mix but care must be taken with the choice of other bulbs as the large heads of the hyacinths can easily swamp smaller companions. However their scent is a bonus. Unlike the tulips which are normally discarded after flowering hyacinths, grape hyacinths and anemones can be transplanted into the open garden once the pot is past its best where they will continue to give many years of service, or they can be stored and reused with fresh tulips in the autumn. We have a large contained which is filled with a mix of Anemone ‘White Spendour’ and Muscari ‘Valeri Finnis’. These stay there all year but each autumn I add some tulips to the mix, removing them once they have flowered, leaving the muscari and anemone in sole possession. This year the tulip was ‘Fusilier’

Cut tulips and daffodils should not be put in the same vase but they will happily grow in the same pot and can be mixed with other spring flowering bulbs to make either dramatic or long lasting displays. My favourite daffodils for this are the mid-season ‘Toto’ and ‘Hawera’. Both are tall enough to dominate the centre of a pot. Small scarlet tulips such as ‘Red Hunter’ or ‘Red Riding Hood’, mixed with A.blanda or muscari can then be planted around them. We have had much fun trying different combinations of either toning colours, such as the pink/white N. ‘Bellsong’ above T. ‘Little Beauty’ or contrasts like T. ‘Stresa’ (red and yellow) with N. ‘Tete a Tete’ or the golden T.tarda below the white N ‘Toto’. We then add a grape hyacinth to complete the picture. 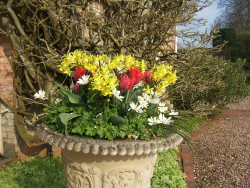 The most important consideration is the size of the container. It does not matter whether it is porcelain, plastic, terracotta or concrete provided it is large enough. Crocks or small stones should be placed over the drainage holes and the pot then half filled with free-draining compost. I prefer to include at least a proportion of loam based compost but any old compost left after the summer bedding plants have been discarded can be reused. Bulbs in containers are generally for single use and come ready packed to grow and flower, needing little other than moisture so it is not necessary to use fresh compost every time.

The base layer of larger bulbs – tall tulips and all daffodils – are placed at the half way level. The bulbs can touch each other. The pot is then filled to ¾ and the small bulbs such as muscari and anemones or small tulips are added. The compost should be topped up and well firmed then watered. It is now that any plants like pansies are added. If there are no plants then there is no need to water the pots again until the leaves appear when they will need regular watering, regardless of how wet the season is, as the broad leaves of the bulbs act as an effective umbrella and the compost can quickly dry out and the bulbs flag. Unless the bulbs are to be reused there is no need to feed them.

If squirrels are a problem, and tulips in pots are the perfect take away for them, I add a layer of gravel or even lay a piece of chicken wire over the top until the bulbs poke through.
Any bulb growing in a container is vulnerable to frost damage no matter how hardy they are in the open garden as the cold will penetrate the sides of the pot, killing the roots. This is especially true of shallow pans. Under extreme conditions precautions may need to be taken.

Slugs and especially snails have a habit of using containers as sheltered housing with meals provided so vigilance is necessary.