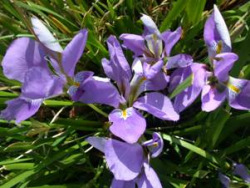 Brisk walks, warm fires and plant catalogues sum up winter, a time of bare branches rather than brightly coloured flowers but there is one group of plants that defy the elements to produce their jewel-like flowers in this most inclement time. These are the surprisingly sturdy winter flowering iris. There are 2 distinct groups of these – the rhizomatous I. unguicularis which flower from October to March and the bulbous I.reticulata group which flower in late winter.

The star of the winter garden is undoubtedly Iris unguicularis, still more commonly called by its old name Iris stylosa. This clump forming iris has tiny rhizomes and long, narrow, sword shaped evergreen leaves. It grows wild throughout the Mediterranean area where it is naturally winter flowering. It is extremely variable both in flower colour and size. It is native to dry, sunny soils and flowers best against a sunny wall where it can be left to form large clumps.

The flowers are a typical rounded rather open iris shape in shades of blue-purple with a striking white and gold centre to the falls. In the best forms these will start to appear in November and continue throughout the winter until they finally run out of steam in April. A cold snap with frost will halt flower production for a day or two but normal service is quickly resumed once the temperatures rise again and there is almost always a few to pick for the house. These are best pulled when in bud rather than cut. They quickly open in the warmth of a room and are one of the most cheering sights for a gloomy winter.

Of the blue cultivars ‘Mary Barnard’ is one of the most vigorous. It is slightly smaller in stature, has narrower leaves and flowers of an intense rich purple. One of the most distinct is ‘Walter Butt’ which has very large flowers of the palest slate blue. The highly sought after white forms are often rather disappointing. Unfortunately the smallest– I.cretensis, ‘Oxford Dwarf’, and the slightly taller ‘Bob Thompson’ and ‘Abington Purple’ are also less hardy than the type and are probably best grown in a very sheltered position or under glass. These are only 4-8” high with more grass-like foliage.

The leaves of evergreen iris still die off regularly to be replaced by new ones. The overcrowded rhizomes and their associated dead foliage found in most mature clumps are the perfect hide away for snails which have an annoying habit of chewing holes in the unopened buds. This damage can be mitigated by reducing the leaves to about 8” in October and vigorously ‘combing’ through the clumps with a hand fork to open them up and to remove as much of the debris, and the resident snails, as possible. Congested plants should be lifted and divided, the old dead rhizomes removed and young pieces of the plant replanted with the rhizome at the surface of the soil and the roots placed downwards. This can be done either in August, when you will lose a flowering season or in early spring which is when we usually do it as it also lessens the risk of frost damage to the newly planted iris. Whenever you chose to do this the new plants must be regularly watered for the first year while they establish their root system.

The other group of winter flowering iris could not be more different. Instead of the mild climes of the Mediterranean basin these tiny iris come from the high mountains of the Middle East where they are buried deep in the snow all winter. I. unguiculalris is naturally winter flowering but these flower as the snow melts in their Middle Eastern mountain homes and the temperature rises. In our gardens this means late winter – early spring; the first coinciding with the last of the snowdrops. Instead of clusters of surface rhizomes reticulata iris have a small pointed bulb, with a whitish netted tunic. They produce solitary flowers and long thin deep green leaves which are triangular in cross section. They are 4 – 6” tall.

There are various species that make up this section. I reticulata is a very variable plant and most of the cultivars in commerce are wild selections. Iris histrioides has much bolder flowers. Sadly the best known form of this, I histrioides ‘Major’, is no longer available but other cultivars are just as easy. There are a few excellent hybrids. 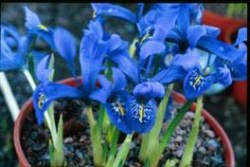 It has always been recommended that reticulata iris should be planted on a sunny rock garden. But in this position the bulbs have an annoying habit of splitting into tiny non flowering bulbils so they are often treated as annuals. However one year I planted a flowering potful of iris in a new shady bed where we grow snowdrops – just to give it some instant colour (the garden is open!) and I noticed that they flowered just as well the following year. I now have well established clumps in cool, humus rich soil under deciduous shrubs so there is plenty of light/moisture when they are growing but dry and shady when they are dormant. The buds will poke through in December and then wait until Feb to flower.

Their early flowering means they also make excellent subjects for pots for greenhouse, conservatory or house. The pots should be kept outside (protected from severe frost )until the buds appear when they can then be brought in to the house to flower.

Cultivation: The bulbs are planted in the autumn in small groups of 5 – 10 bulbs 4 – 6″ deep. They are traditionally grown as rock garden bulbs in a sunny situation but the dry soil usually causes the bulbs desiccate and to split into tiny bulblets which will then take some years to regain flowering size. Extra deep planting and feeding with a low Nitrogen fertiliser is often recommended to overcome this. However bulbs that are planted in a cooler, but equally well drained, position among shrubs do not split up in the same way and will continue to flower year after year. They can be grown in light grass under trees and are excellent subjects for growing in containers and make attractive pot plants to bring indoors once the buds appear.

Pests: these early flowers are like caviar to slugs who will leave unsightly holes in the petals. The bulbs can suffer from Ink Spot disease. Infected bulbs should be thrown away.

I.danfordiae This is the first of the group to flower with very angular yellow flowers with green spots in the throat and virtually no standards at all – just a vestige between the 3 falls. It tends to less reliably perennial than the others. More inclined to split. Mountains of Central Turkey Height: 5″

This very variable early flowering iris grows wild in N Iran to C Turkey where it flowers as the snow melts. Over the last 100 years many colour forms have been selected. The following are some of the best cultivars. ‘Alida’ (illustarted)– is a new cultivar with exceptionally large mid-blue flowers. Good in pots; ‘Cantab’.-pale Cambridge blue; ‘Edward’, intense bright blue with a distinct orange ridge; ‘George’ AGM is a hybrid with I.histrioides and has exceptionally large flowers of rich purple; ‘Harmony’ has well-shaped flowers of a good clear blue and is scented. It is recommended for pots as the leaves remain short at flowering: ‘Pauline’ deep purple with a distinctive white central stripe. Height: 6″

Whites – there are some rather pathetic off white cultivars but they are very weak. There are also some new hybrids with amazing colour combinations which are not yet commercially available so their vigour is yet to be tested but they are worth looking out for as they make a beautiful pot plant

An amazing hybrid between I.winogradowii and I.histrioides. It is much more vigorous than many of the cultivars and has significantly larger bulbs. The flowers are an extraordinary mix of cream and yellow overlaid with blue and green. It sounds dreadful but is very beautiful in the flesh. If planted in shade it will form large long lived clumps. Height: 4″. ‘Frank Elder’ – similar with less yellow in the falls. ‘Sheila Ann Germany’ is another hybrid of similar parentage and vigor with very large flowers of clear sky blue.
This entry was posted in Uncategorized. Bookmark the permalink.