Fritillarias can be bought between May and November from our Autumn Catalogue or in season from our Online Store.

Although I have been in professional horticulture for 30 years, prior to our purchase of BG my experience of growing bulbs was limited to the few ‘normal’ daffs that every garden has. BG introduced me to the magical world of small bulbs- narcissus in particular, and our first RHS spring show introduced us to Michael Upward who quickly parted us from our profit for that show, converting it into life membership of the AGS. From that beginning our knowledge of small bulbs expanded rapidly indeed. 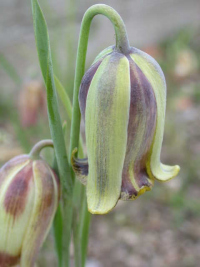 One of the most influential contacts in those early years was Jack Elliott and it was in his glasshouses that we first saw and coveted a collection of Fritillaries. The acquisition of 3 bulb frames coupled with a trip to Eastern Turkey, where I first saw the delightful gold-tipped bells of F michaelovskyi, among others and I was hooked. However over the years Frits have only really played a bit part in our collection. I will leave the wonderful displays of the rare and difficult ones to the real experts. Here they have to accept benign neglect and a remarkable number seem to have done just that, in particular F. messanensis. This rather tall fritillary, with large, greenish-gold flowers and intense chocolate brown tessellations has proved to be easily grown in a well drained, sunny position and is equally easily raised from seed. The well known F.acmopetala grows happily alongside it.

F. pontica, with its 2-3 chunky green bells, started life cosseted in the bulb frame where it grew to magnificent proportions – a “dead cat plant” in Jean Elliott’s words. We then let it take pot-luck on the rock bank and it has continued to do well, although it has never set seed. Other occupants of the bulb frame have proved rather more variable in their performance -some lasting only a few seasons before dwindling to nothing whilst others have continued to flourish but not show any inclination to bulk up in a meaningful way. Two members of the Rhinopetalum group, F.stenanthera and F.bucharica, fit into the last category. Although they live and flower in the bulb frame they are at the open end where they always receive a little moisture throughout the year.

We have found others easier to propagate by seed than offsets. The original bulbs of F. sibthorpiana and F. bythinica set large amounts of seed, which is then sown in seed trays as soon as it is ripe. These then spend the summer outside where they are somewhat erratically watered, moving into the tunnel for the winter. Bulbs start flowering in 4-5 years. The only really frustrating bulb is F. zevertzovii. In the 20+ years that I have grown this bulb it has never set seed or produced an offset. The original bulb is now huge and happily lurks deep in the frame, erupting into growth early in the spring. We have also found that it is very moisture sensitive and will abort the last flowers unless given copious amounts of water.

Water, or rather the lack of it, is the principal cause of poor performance of the Crown Imperial group. Our soil here is a very free draining river alluvium and our average rainfall is only just over 20”, not ideal for the bog dwelling F imperialis. They seem to flower 1 year in 3, preferring the heavier soil of the lower nursery to the light soil of the garden. They suffer from the inevitable mini drought that we seem to have each April, just when they need the most rainfall. The Persian fritillary F persica, is normally encountered in its chocolate purple form which can be shy to flower but the new Ivory Bells with towering spikes of creamy green flowers is much more vigorous and seems set to be an excellent garden plant.

Another fritillary that is traditionally associated with water meadows is the native snakes head fritillary F. meleagris but it has proved to be much more adaptable to a wide range of conditions than many gardening writers would have you believe. It has always grown well in the semi shade of our woodland beds but I wanted drifts in the grass. I first tried to establish it under a Japanese cherry but as fast as I planted the bulbs in the autumn the mice, or squirrels, came along after me and ate them. In the end I resorted to potting the bulbs and planting out the flowering potfuls the following spring. This proved very successful and soon the colony was self-seeding and producing a whole range of colours from deepest purple to pure white. We do not cut the grass until all the seed capsule have burst, leaving time for the seed to settle and also remembering to leave a large enough area uncut around the colony next spring for the seedlings to grow. We successfully repeated the exercise when we decide to establish a wild meadow of frits and Narcissus bulbocodium in the more traditional damp area beside the pond. Each spring we add a few more potfuls to the planting, the main advantage of this being that we can see exactly where the gaps are. 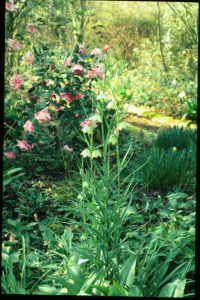 Often we kill plants by kindness. For many years we have grown what the trade persist in calling F. verticillata, a central Asian species, but is probably more correctly the smaller flowered Chinese F. thunbergii. The bulbs grow and increase well but flowering in the open nursery beds was sporadic at best. I then planted some in a new woodland bed that we had created. Here they revelled in the light, humus rich soil that is dry in the summer and proved what a fantastic plant they really are- flowering profusely and setting seed. Growing in the next nursery bed to the blind F. thunbergii is one of our more unusual fritillaries. A chocolate-brown form of F. affinis was planted here many years ago when it was known as F. lanceolata. I can’t say that it has exactly flourished but it is still growing and producing handsome spikes of speckled brown flowers and good amounts of seed. The bed it is in is an amazing hotch-potch of F.meleagris, F.camschatcensis, Erythronium Revolutum and Dodecatheon meadia Alba. They started life in regulated rows but over time have spread into each other so that it is now a glorious muddle which we use as a source of seed. 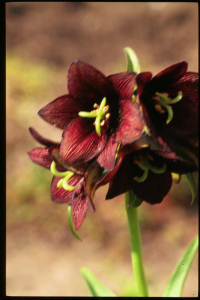 Even a small change in circumstances can adversely affect performance. We have a long wall running east-west dividing the nursery in two. Under the north side of this we built a raised peat bed which received any rainfall going but was constantly in shade. The Alaskan F. camschatcensis, green, white and the aberrant double, all grew and flowered well. Then two events happened almost simultaneously. Firstly the wall blew down and we only rebuilt it to fraction of its former height, allowing direct sunlight to fall on the bed for the first time, both raising the temperature and significantly reducing the moisture levels. The Frits hated it. They came into growth each April, full of promise, only to quickly wither away. The second happening was the advent here in the west of the dreaded lily beetle. Even if we remembered to give them plenty of extra water the beetle beat us to the flowers. We have now included them in our anti beetle campaign by watering them with a proprietary caterpillar killer which seems to work well on my lilies. The main problem is remembering to start early enough, before the beetles cause too much damage. It remains to be seen whether we will ever have the display we once had.

Although the gems of the genus are stunning show-winners I have a sneaking affection for the quieter members of the fritillary family, not least for their adaptability and tolerance of the inadvertant neglect that is inevitably found in a busy nursery.